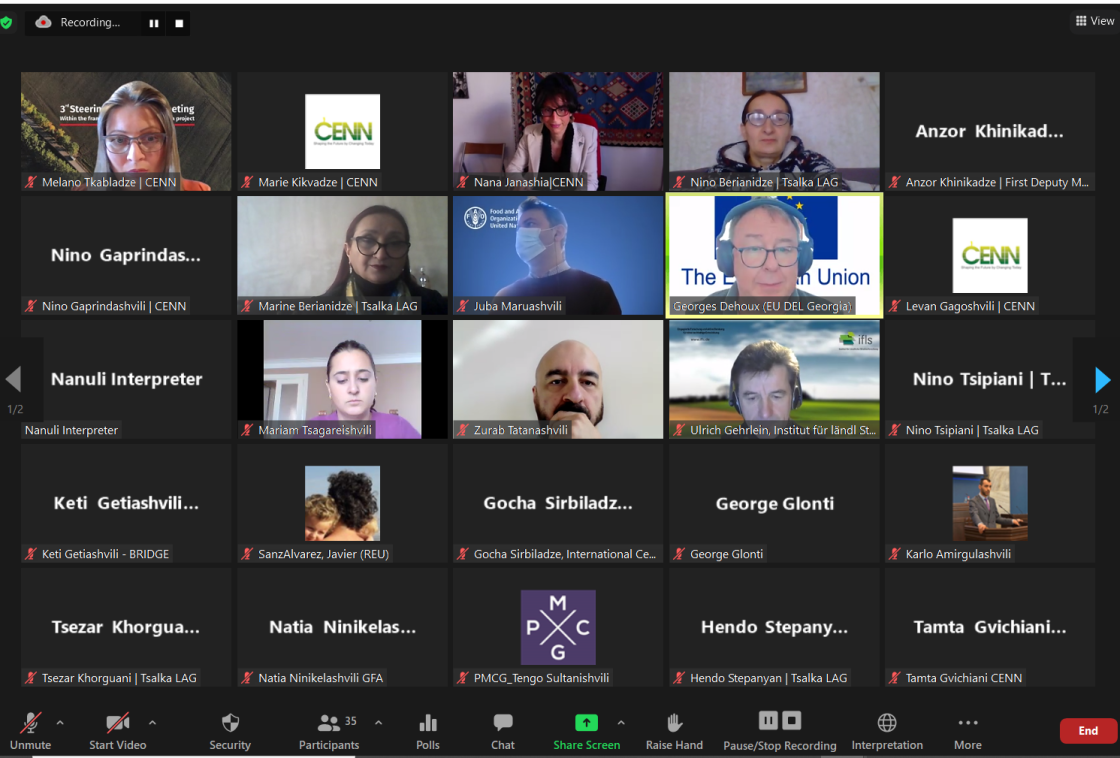 February 7, 2021. ZOOM – EU supported project “EMBRACE Tsalka” implemented by CENN hosted the Steering Committee meeting. The purpose of the meeting was to get an update on current and planned activities within the project, exchange information and recommendations, and discuss future cooperation perspectives. During the meeting, sustainability of LAGs was discussed. Project’s German partners introduced the European practice and sustainability of Local Action Groups.

“2021 has been a difficult year for all due to the continuing pandemic. The EU Delegation would thus like to acknowledge the outstanding work done by both CENN and the Embrace Tsalka LAG during these challenging times. This is a credit to their commitment and civic engagement. We have actually seen this happening in all areas where Local Action Groups are active. It is further demonstration of the crucial role community-led local development (CLLD) plays in building up resilience at local level, while supporting inclusive development in the area.

2022 is the last year of this ENPARD III project. While we will continue to support Tsalka and its LAG through other means in future years, it is very important that we make sure that we maximise the impact of this project before closure. We also need to focus on the sustainability of LAGs and LEADER/CLLD process in Georgia. The Government of Georgia has taken a significant step in that direction by committing to the insitutionalisation of the LEADER/CLLD process by latest 2023. The EU welcomes this initiative and will fully support it through its ENPARD programme.” noted Georges Dehoux, Programme Manager for Agriculture, Fisheries & Food Safety at the Delegation of the European Union to Georgia.

“I am glad that we were given the opportunity to meet and exchange information again. Thank you for attending our event, because your involvement and participation is very important to us. Also, thank you to the EU Delegation to Georgia for both political and financial assistance. The Tsalka project, unlike previous ENPARD projects, focuses on the fourth area in addition to the three existing ones, which involves the integration and empowerment of vulnerable groups. I believe that working in this direction made the project even more sustainable in the long run, because integration is one of the most important challenges for Tsalka Municipality and the project works in different directions to address these challenges and support economic and social development of the municipality,” noted Nana Janashia, CENN’s Executive Director.

“Tsalka is not discovered, not only by the Georgian population, but also by the people of Tsalka, and it is very important that your project branding ‘EMBRACE Tsalka’, focuses directly on the municipality and its awareness, because one of the areas that can bring economic prosperity to the municipality should be tourism, especially at a time when the municipality has a really great tourism potential, due to its beautiful nature and location. When we talk about rural development, we see other economic activities besides agriculture, and local initiatives supported by the European Union and the ‘EMBRACE Tsalka’ project, be it cattle breeding, entrepreneurship or tourism, are very important for creating local economic wealth and developing a municipality,” stated Giorgi Khanishvili, the First Deputy Minister of Environment and Agriculture of Georgia.

At the end of the meeting, the participants agreed on the implementation of activities in cooperation with the current projects and the availability of opportunities.