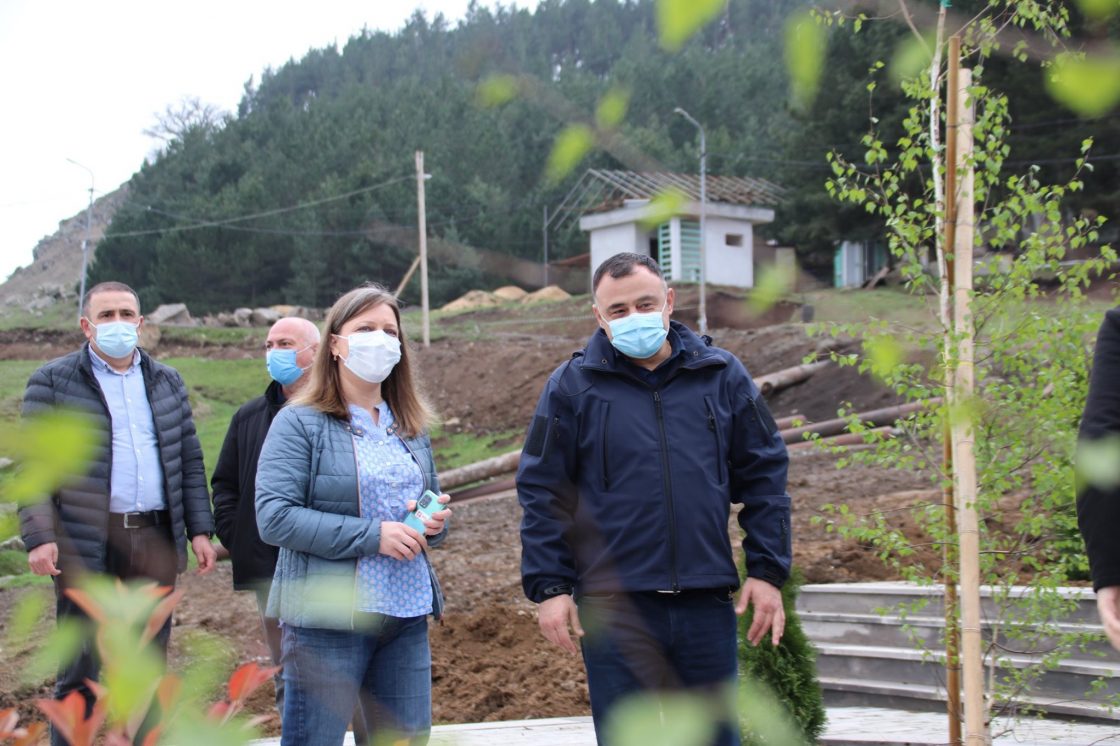 April 22, 2021. Tsalka Municipality – More than 1 billion people in 192 countries now participate in Earth Day activities each year, making it the largest civic observance in the world.

First celebrated in 1970, it now includes events coordinated globally by the Earth Day Network in more than 192 countries.

We are pleased to announce that the EU-supported Tsalka Local Action Group (LAG), together with CENN, has joined the large-scale campaign to celebrate Earth Day with Mr. Gogi Meshveliani, Majoritarian MP of Bolnisi, Dmanisi, Tetritskaro and Tsalka. Within the campaign Tsalka LAG organized a tree planting campaign at five different locations in Tsalka Municipality, including Bareti and Tsalka N1 Public Schools with the active involvement of Tsalka LAG members, teachers, and students. As part of the planting campaign, 50 trees were planted around the territories of the schools. Up to 120 people took part in the event.

Gogi Meshveliani, Majoritarian Deputy of Bolnisi, Dmanisi, Tetritskaro, and Tsalka, visited two of the EU ENPARD-supported economic development projects, Hotel HOME+ and sewing “Nargo” and Kaas Land infrastructure project in the village of Dashbashi. During the visit, Mr. Meshveliani noted that the economic empowerment of the population at the local level and their promotion is crucial for the social and economic development of the municipality. Investment projects and EU support are crucial diversification of the municipality’s economy and empowerment of the population.

“EU assistance and CENN’s involvement in the socio-economic empowerment of Tsalka Municipality will have a positive impact on the future of the population. I believe that with cooperation and optimal use of resources, together we will be able to make Tsalka a more attractive place for young people and prevent the outflow of young people from the municipality. Today’s tree planting event shows that young people are the positive future of our country and we must make strengthening and supporting them a priority of our lives, “– noted Mr. Gogi Meshveliani.

During his visit to Tsalka, the majoritarian MP of Bolnisi, Dmanisi, Tetritskaro, and Tsalka also met with the representatives of the Tsalka Local Action Group (LAG) and the team of the project “EMBRACE Tsalka”. During the meeting, the parties discussed the development strategy of the municipality and the challenges that Tsalka LAG faces during the implementation of the project. Mr. Meshveliani noted that he will continue to actively cooperate with Tsalka LAG in the future. Tsalka LAG members also briefed Mr. Meshveliani on the problems of eco-migrants and land legalization, to which he said, “For the population to feel the ownership to the municipality, it is important for them to own the property and have future and long-term life goals here”.

“Celebrating Earth Day and organizing a large-scale campaign with young people and schools is important for the development of the project and the Tsalka LAG as a local action group. We are glad that by organizing this event, we have contributed to the celebration of Earth Day and raising awareness of the importance of this day in the municipality”– said Nino Tsipiani, Chairman of Tsalka LAG.

At the end of the meeting, the parties agreed on close cooperation and joint celebration of environmental campaigns in future.